Amy Cerato ’99 was saluted by President Barack Obama as one of the nation’s most outstanding young researchers in a January ceremony in the East Room of the White House.

Pulling on gardening gloves at her lake house one hot afternoon last July, Amy Cerato ’99 was looking forward to an afternoon of yard work with her parents when she grabbed a glance at her email inbox. Far from her soil test sites in Oklahoma and lab centrifuges in California, she opened a message that signified the highlight of her burgeoning career.

Cerato had been named a recipient of the Presidential Early Career Award for Scientists and Engineers. The government’s highest honor for young professionals in the early stages of their independent research careers, the award recognizes exceptional potential for leadership at the frontiers of scientific knowledge and a commitment to community service.

“I read the email. I read it twice. Then I started going crazy,” recalls Cerato, an assistant professor of civil engineering at the University of Oklahoma. “I thought: it’s just going to be a chance of a lifetime to meet the president!”

Cerato’s research focuses on the design and construction of robust foundations for critical infrastructures. 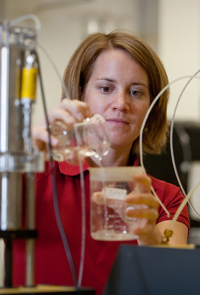 “Receiving this award is the highlight of my career,” says the civil engineering graduate. “I am ecstatic.” After Lafayette, Cerato earned master’s degrees in geosciences and civil engineering and a Ph.D. in geotechnical engineering at the University of Massachusetts. In 2008, the National Science Foundation honored her with its Faculty Early Career Development Award and a grant of $400,000.

Cerato’s research focuses on the design and construction of robust foundations for critical infrastructures, particularly in marginal soils, soils that swell when subjected to moisture. She says the United States spends $15 billion a year repairing infrastructure built on expansive soils. “You have to build with Mother Nature rather than against her. You can’t beat her. You need to still allow the soil to swell or chemically remediate it.”

Understanding the soil mechanics is the easy part. Convincing government officials and homeowners to go to extra expense to build proper foundations that accommodate for marginal soils is the challenge.

“I’m trying to get homeowners and department of transportation officials to understand soil mechanics so they can build right the first time,” Cerato says. “Taxpayers don’t have the knowledge to do that right now. That’s why I’m trying to do a lot of education and outreach to the public and officials. Building something right might cost extra thousands now but save millions of dollars in damages later.”

Millions is an understatement. Yet problems related to expansive and marginal soils won’t show up on a list of FEMA’s worst natural disasters – nor will they be covered by the average insurance company.

A Solid Foundation at Lafayette

One of 13 women among Lafayette’s 23 civil engineering grads in 1999, Cerato took advantage of many opportunities to customize her educational experience, benefiting, she says, from Lafayette’s combination of engineering and liberal arts and intimate campus setting. “I gained a solid knowledge base in civil engineering, and, more important, the ability to think critically.” 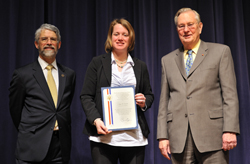 She studied in Brussels for a semester, where her courses included a class taught at Lafayette by Leonard Van Gulick, Baird Professor of Mechanical Engineering, via video teleconference. She also took an interim-session course (“a once-in-a-lifetime opportunity”) in Kenya and Tanzania with Rex Ahene, professor of economics, and Roger Ruggles, associate professor of civil engineering. In an externship with Robert T. Doble ’69 at the Pennsylvania Department of Transportation, she studied bridge design and participated in a construction inspection of the Lackawanna Valley Industrial Highway. She also competed on the golf team, founded the Pep Band, and performed in a variety of music ensembles.

In the summer of 2005, a few months after she joined the faculty at Oklahoma, Cerato was a mentor to Rachael Oleski ’06 in an NSF-sponsored Research Experience for Undergraduates program in Norman. They analyzed soil from small-scale landslides in the state, and when Oleski pursued the topic further in an honors thesis the following year, Cerato continued in an advising role.

Now, while the presidential award promises to set her career on an even faster track, Cerato tempers her workload with fun. She and her civil engineer husband wrestle with their three dogs, camp at the Oklahoma lakes, and mountain bike year-round. They’ve gutted and rebuilt their home refurbished a ’66 Mustang and a ’67 Chevy pickup.

But getting her hands in the soil is her main passion. Cerato boasts an expansive garden and a collection of 75 tropical plants that she hauls indoors for the winter. “If I had another career, I think I’d probably own a nursery. I’d be a tropical plant grower. It’s so relaxing. In my next life, that’s what I’d do.”