Dennis Waldron ’10 at the Naval Air Systems Command. Ashley Cramer ’10 at the Max Planck Institute in Germany. These and many other extraordinary research opportunities are made available to students by Lafayette faculty who are leaders in their fields.

Waldron, an electrical and computer engineering major, has pursued his passion for research for three years. Through the connections of his research adviser,
William Jemison ’85, associate professor of electrical and computer engineering, Waldron has served internships with Brandon Cochenour, a 2003 Lafayette graduate, and Dr. Linda Mullen at NAVAIR, the Naval Air Systems Command.

Their work merges radar and lasers to create techniques for high-resolution ranging and measurement under water. Waldron’s experimental measurements will help Navy engineers design systems and predict their performance.

Ashley Cramer ’10 was awarded a National Science Foundation Graduate Research Fellowship to pursue a Ph.D. in chemical and biological engineering.

“Underwater laser communications have recently become a high-interest technology in both military and scientific communities,” Cochenour says. “I was most impressed by Dennis’ ability to pick up on concepts that he hadn’t yet been introduced to, especially since our research encompasses a broad range of electrical and computer engineering areas.”

Waldron believes the experience will prove valuable as he pursues a Ph.D. in electrical engineering with a focus on optics and photonics.

“I like to think of the time I spent at NAVAIR as a college lab course brought to the real world,” he says. “I was able to get on-the-job training with hardware and software used in the electrical engineering industry. Some of what I worked with was specific to my tasks with the underwater optical communications system, but most of the experience is applicable to any future work I’ll engage in.” 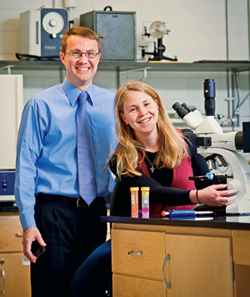 Waldron also has done advanced research on campus with Jemison, who was elected an IEEE Fellow for his contributions to microwave photonics for radar and communications. The student’s research has been so successful that he was awarded first prize in the student project competition at IEEE’s OCEANS ’09 conference in Biloxi, Miss. OCEANS is the world’s leading conference and exhibition on marine science, technology, and engineering.

“Dennis is genuinely excited about the ocean sciences and the LIDAR (Light Detection And Ranging) work with the Navy, and his summer internships gave him a great foundation for doing independent research with
me,” Jemison says. “This obviously served him well, as his first-place paper is quite impressive. He recognizes that success comes from hard work, perseverance, and his own initiative.”

Jemison has received continuous funding for his research from the Office of Naval Research and the National Science Foundation since 1999. Cramer’s research mentor, James Ferri, an associate professor of chemical and biomolecular engineering, also has been successful in securing grants from NSF that support innovative teaching and research and the purchase of specialized equipment. He has twice been awarded fellowships by the Alexander von Humboldt Foundation to do research at the Max Planck Institute for Colloids and Interfaces in Golm-Potsdam, Germany.

“I became interested in performing research because I’m a very hands-on person, and the hands-on nature of research helps me learn and apply concepts,” says Cramer, a chemical engineering major. She has collaborated with Ferri for two years on nanotechnology research, as an EXCEL Scholar and for her honors thesis. Last summer, she was a visiting research student with Ferri at the Max Planck Institute. Their research investigates the elastic properties of ultra-thin membranes, which has applications in force sensor technologies and controlled drug delivery.

“I find it fascinating. I like the interdisciplinary aspect because I’m required to have knowledge from many different subject areas,” Cramer says. “Professor Ferri has been a great mentor and also provided guidance outside of research and the classroom.”

Cramer has presented her research at the national conferences of the American Chemical Society and the American Institute of Chemical Engineers. She was awarded honorable mention in last year’s competition for the Goldwater Scholarship, the nation’s premier undergraduate award in the fields of mathematics, science, and engineering. She plans to pursue a Ph.D. in chemical and biological engineering, a path she has chosen because of her work with Ferri.

“Ashley is an outstanding student who was seeking a research experience to compliment her academic experience,” Ferri says. “My research was a perfect fit, and I’m glad to have had the chance to work with her. The most important things she will take away from this experience are greater confidence in her own abilities and a sharper focus for what she wants from her future career.”