In a semester-long program led by Lafayette faculty, Martin Racenis ’11 studied engineering and European culture, history, and politics at Jacobs University Bremen. A second international immersion brought him to Tohoku University in Sendai, Japan, with Lafayette professor Joshua Smith, where they continued their research into techniques for delivering chemotherapy drugs following surgery to patients with malignant brain tumors.

Ever tried cuttlefish? I hadn’t either, until my trip to Japan.

You cannot imagine how lucky I felt the day Professor Smith sent an email asking if I would like to work with him as an EXCEL Scholar for the summer. And then, two days later: “Oh, by the way, would you like to go to Japan?” But the summer was about research, not just travel, and I have to admit that, at first, learning about Matlab programming and the mathematically intimidating technique of finite element analysis didn’t sound so appealing. As a student of mechanical engineering, I wanted to work on thousand-horsepower engines and innovative airplane-wing design! I had never typed a line of code, and I was supposed to get used to writing and deciphering Matlab code?

As you have probably guessed, though, my summer turned out to be very appetizing. 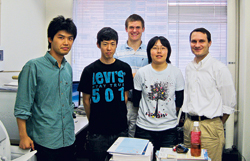 For starters, Professor Smith served up a selection of readings on Matlab and finite element analysis. Next was a rather difficult-to-digest plate of finite element code sent to us by a collaborator of Professor Smith’s in Colombia. Good thing I had a little help from the Google Translate tool to help wash that down. The main course was a blend of coding my own Matlab routines, running lengthy simulations, graphing and analyzing results, and, sometimes, doing things over again because of a small mistake in the very first step.

Though already stuffed, I couldn’t wait for dessert – a trip to Japan to work with Professor Kenichi Funamoto at Tohoku University.

After spending 13 hours at 35,000 feet sleeping, watching movies, and enjoying snacks, followed by several more hours on a bullet train, Professor Smith and I stumbled into the city of Sendai, about 180 miles north of Tokyo on the Pacific Coast of Japan’s main island, Honshu.

Instantly becoming illiterate is a odd feeling, one I had never experienced, not even during my semester in Europe. Fortunately, it was not a case of one blind man leading another, because Professor Smith had listened well in Japanese class. When I was alone, I was able to get by with combinations of kudasai (please), arigato gozaimasu (thank you), and sumimasen (excuse me) – along with some gesturing. At the sushi place, for example, a slight bow at the waist and “Sumimasen, salmon maki kudasai. Arigato gozaimasu!” worked wonders.

For two weeks, I made halting progress on a research manuscript and ran more simulations in Professor Funamoto’s lab. The following description is just a small taste, but our work is based on using finite element analysis to run computer simulations that model the distribution of drugs infused by a catheter directly into the brain, as well as calculating the deformations and pressures caused by the injection of this fluid.

Professors Smith and Funamoto sat in a crowded little office working on their programs, sometimes together and sometimes separately, and on a nice-looking three-dimensional mesh of a rat brain for use with their code. I tugged Professor Smith’s sleeve with questions once or twice – or three times, or 10 – throughout the working day.

Lunch was usually a bento box from the school store. I think of bento as Lunchables on steroids, with meat or vegetables and sauce on top of rice. Professor Smith and I had the privilege of visiting Professor Funamoto’s house for a wonderful lunch with his wife and baby daughter. We enjoyed excellent pizza and my new favorite beverage, mugicha, or wheat tea. For dinner, we visited local restaurants and dug our chopsticks into interesting delicacies such as cow’s tongue (called gyutan), oysters, curry, miso soup, and sushi. All served with rice, of course. 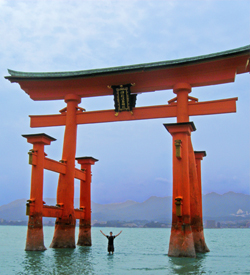 Professor Smith and I visited Hiroshima during the weekend, where we saw the Atomic Dome, rang the Peace Bell, and explored a very interesting museum detailing the traumatic history of the city. Later, we visited a very beautiful shrine on a nearby island. The next day we explored the imposing wooden Himeji Castle and its amazing gardens and even came upon a traditional Japanese dance festival. All of it is still vivid in my mind.

What a summer! I feel very fortunate having the privilege to work with Professor Smith while learning Matlab coding and finite element analysis. I wish all students could experience the sights, sounds, and culture of Japan.
Each learning experience was an unforgettable delicacy.