Lafayette students and faculty are working with the Lower Ninth Ward on efforts to rebuild as a sustainable community. Nicolus Oliver ’10 designed a green lifestyle center. 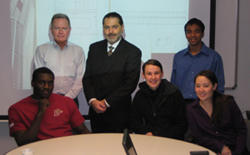 The efforts are under the umbrella of the College’s Economic Empowerment and Global Learning Project, which Hutchinson founded in 2007.

“Faculty and students from across disciplines combine their knowledge with the creativity, local knowledge, and experience of community members to problem-solve about important community and societal concerns,” Hutchinson explains. “This process strengthens the capacity of community residents to be agents of their own community development, well-being, and freedom.” President Bill Clinton recognized EEGLP’s work in New Orleans as an exemplary commitment to action at the inaugural Clinton Global Initiative University Conference in 2008.

This project opened new doors for me. I got to know my professors well, use my skills in practical situations, and work with a team of other students. It’s one of the best experiences I’ve ever had. 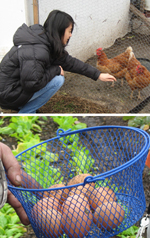 In L9W, residents want to repopulate the neighborhood and recover from Katrina’s devastation in an environmentally sustainable manner, Veshosky says.

“One of the things the Lower Ninth Ward community decided it needs to attract people back is a grocery store, perhaps with other retail businesses such has a pharmacy or bank. They are also concerned that the location be safe,” he says. “Our job in this project was to develop a concept plan for a lifestyle center that included such features.”

Toward a Carbon-Neutral Lower Ninth

Nicolus Oliver ’10, an engineering studies major with a minor in architectural studies, developed a plan for a center with a grocery store, bank, and restaurant on the ground floor and offices on the second floor. The design included solar panels, permeable paving for the parking lot, a green space, attractive fencing for security, and a rainwater catchment system.

“This project opened new doors for me,” says Oliver, who is also a defensive back on Lafayette’s football team. “I got to know my professors well, use my skills in practical situations, and work with a team of other students. It’s one of the best experiences I’ve ever had.” 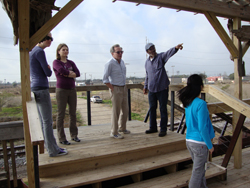 “We toured the neighborhood, met community leaders, and attended community meetings. After we returned, I made revisions to the design, eventually creating five different designs,” he says. He also developed cost estimates associated with various scenarios for creating the lifestyle center. In accordance with L9W’s commitment to sustainable repopulation and development, Oliver’s concepts assumed maintenance of green space; use of energy efficient building materials, fixtures, and appliances; use of photovoltaic panels and solar hot water heaters; and reuse of greywater.

Jessalyn Rolwood ’10 (civil engineering) is adapting Oliver’s concept designs for another site in the Holy Cross neighborhood. Jacqueline Gowdy ’11 (double major in engineering studies and international affairs) analyzed federal, state, and local incentives for using renewable energy systems. She studied the economics and financing available to encourage the use of renewable energy, including costs, rebates, energy savings, and renewable energy credits that can be sold to electric power companies.

Nigel Martin ’10 (engineering studies), Diana Hasegan ’10 (double major in civil engineering and economics), and Rolwood are working to develop a carbon model for the L9W as a way to measure the area’s carbon footprint.

“The students are acting as consultants,” Veshosky says. “They are gathering information and developing concepts and cost information so the community can make good decisions. It’s an excellent learning opportunity for them.”

Charles Allen, chair of the board of the Holy Cross Neighborhood Association, says Lafayette students and faculty “have been instrumental in helping us in the Lower Ninth Ward focus on tapping into the entrepreneurial spirit of our community. They have been very helpful in working with us to attract a new supermarket to our community and in helping our residents develop syndicates and open up small businesses.”

IN HONDURAS AT HOME 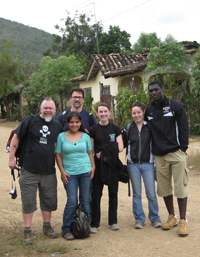 Lafayette’s collaborative work in New Orleans grew out of efforts by the campus chapter of Engineers Without Borders to bring clean water to three rural villages in Honduras. After designing and building the first water supply system, the students realized the villagers would not be able to maintain the system without eventually replacing components, which would take money the villagers did not have. So, with Hutchinson’s guidance, the students began assisting the villagers to develop a sustainable local economy using community-wide entrepreneurship, such as growing and selling coffee beans. Hutchinson realized the paradigm used in Honduras, economic empowerment and local decision-making, would work equally well in New Orleans and other locations.

The model also has been extended to Lafayette’s hometown of Easton, Pa., where a multidisciplinary team of students and faculty worked with community organizations and residents to develop concept plans and evaluate the economic impact of converting the city’s historic Governor Wolf Building into an arts center and cultural hub.