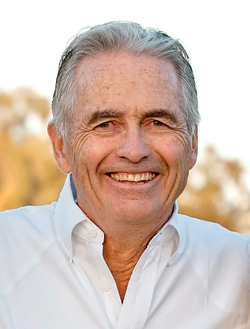 “Three years ago we sold the processing side of the business to Ocean Spray,” says Swanson, “and retained our nine operating farms, which are located in the beautiful lake region of southern Chile.”

Swanson, who lived and managed the operation in Chile for several years, now lives in Rancho Santa Fe and Del Mar with his wife, Melissa, and children, Kate and Alec. He joined Cran Chile at the request of his friend, founder Warren Simmons, the legendary entrepreneur known for San Francisco’s Pier 39 and Chevys restaurants.

In addition to Simmons, “I have had the good fortune of business mentors along the way, including some Lafayette alums, beginning with David Bubser ’56 who introduced me to the investment banking business at Lazard Frères.”

An industrial engineering graduate, Swanson completed his M.B.A at Columbia, joined Lazard, and moved to California where he worked in real estate banking for Eastdil and Goldman Sachs. He was also vice president of real estate for Levi Strauss. He has served on many boards, including chair of San Francisco Chamber of Commerce and chair of NTC Foundation in San Diego. He is currently vice president of Parker Foundation and board member, Rancho Santa Fe Foundation.

An early mentor instrumental to Swanson’s success was his high-school teacher Atwell Thomas ’27, who convinced him to transfer to Lafayette from the U.S. Naval Academy. “I got a great education at Lafayette, but even more important was the camaraderie I found through my fraternity. Phi Delta Theta ’66 brothers Bill Watts, Kent Rockwell, Bill Friesell, John Darr, Paul Babcock, Peter Cressman, William French, and Dave Walker ’67 have remained my good friends, and we look forward to our reunions every year.”