One of Massachusetts’ leading public health advocates, Dr. Alan Woodward ’71 has received the Lifetime Achievement Award for service to his profession, patients, and the Massachusetts Medical Society for nearly four decades. 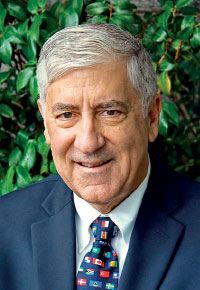 His colleagues praised him as a “potent and persistent patient advocate, setting exceedingly high standards and pursuing excellent health care for all. Health care is not his job; it is his passion.”

An electrical engineering graduate, Woodward holds an M.S. in bioengineering from Columbia University and M.D. from Tulane University. “Lafayette is where I learned to look at issues logically and formulate solutions,” he says. “My engineering education has been very beneficial both in the clinical and administrative aspects of medicine.”

Woodward was instrumental in the passage of the Commonwealth’s Managed Care Patient Bill of Rights in 2000. Since 2007, he has served as a member of the Massachusetts Public Health Council, assisting in setting public health regulations for the state.

Chair of Tobacco Free Mass, he is one of the founders of Massachusetts Alliance for Communication and Resolution following Medical Injury, an alliance of patient advocacy groups, hospitals, insurers, and provider organizations committed to reforming medical liability.

Woodward’s many awards include the Henry Ingersoll Bowditch Award for Excellence in Public Health as well as being named a Lifetime Fellow and Hero of Emergency Medicine by the American College of Emergency Physicians.