Among the most famous ancient Greek aphorisms is “know thyself.” As an engineer, Colin Rementer ’12 is used to solving problems, but majoring in women’s and gender studies (WGS) helped him gain the confidence to not only answer questions but ask a few of his own. 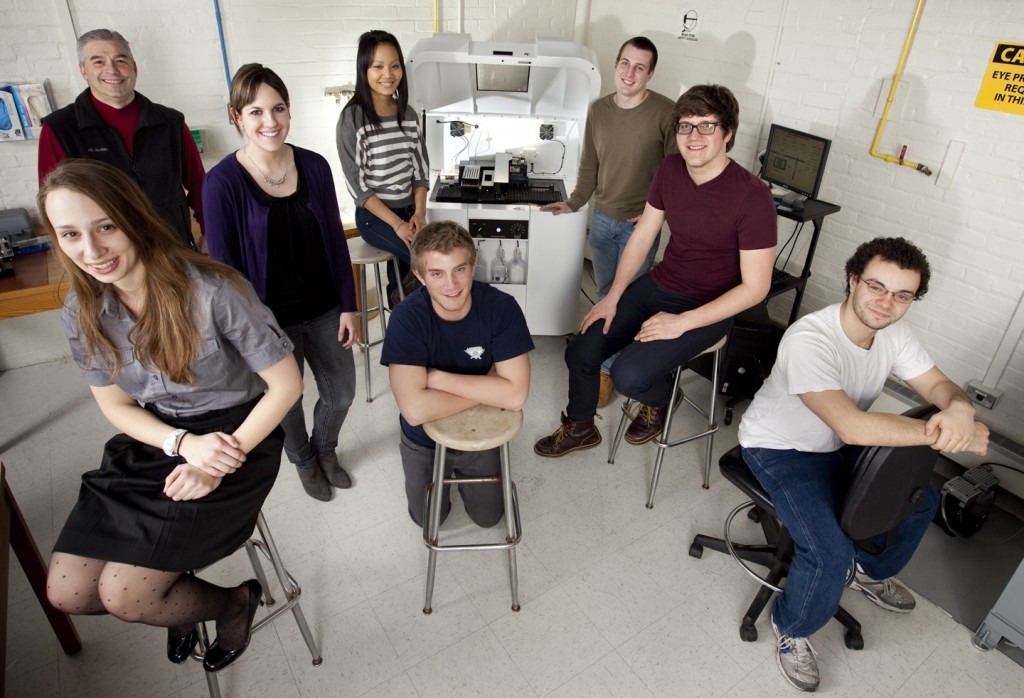 Colin Rementer ’12, second from right, worked with the College’s 3D printer in the chemical and biomolecular engineering senior design course.

Often seen as rocking the proverbial boat, asking questions, Rementer believes, is the “simplest route to change.” His courses in WGS inspired him to examine his own life and perspectives.

“Do I dress the way I dress because I want to? Or is it because I have always done it that way? These questions were daunting at first because I was worried that the answers would mean my choices were not my own,” says Rementer, who is pursuing a Ph.D. in chemical and biomolecular engineering at UCLA. “As I went through my studies and post-graduate life, I’ve realized that it’s a healthy and important exercise because it helps me know myself better.”

Rementer credits the WGS program with helping him find his academic stride. Prior to taking his first introductory class with Michelle Geoffrion-Vinci, professor of foreign languages and literatures, he struggled academically. Geoffrion-Vinci’s enthusiasm flipped a switch.

He self-designed a major in WGS (only available as a minor at the time) and saw dramatic improvement in his engineering classes. The program’s multidisciplinary appeal is evidenced by the professors who had the most impact on him: Geoffrion-Vinci (Spanish); Yaba Blay, former visiting associate professor of Africana studies, who offered “incredible perspective and insight” into how race and ethnicity interact with gender and sexuality; and his adviser, Mary Armstrong, associate professor of WGS and English and chair of the WGS program.

It was Armstrong who kept Rementer going when he had to carry six courses a semester to complete both his B.S. in chemical engineering and A.B. in WGS in four years. She also advised both of his independent study projects. (He also worked with Javad Tavakoli, professor emeritus of chemical and biomolecular engineering, on a project studying diesel fuel additives through the EXCEL Scholars undergraduate research program.)

His project on the U.S. military’s controversial “Don’t Ask, Don’t Tell” policy was unique in that it gave him an opportunity to explore masculinity as he studied the military’s negative stance on homosexuality in light of increasingly positive public opinion and the repeal of “Don’t Ask, Don’t Tell.” Rementer had “an absolutely amazing experience” when he presented his work at the National Conference for Undergraduate Research.

“What grabbed me most [about WGS] is the complexity of the field – a person’s experience is a function of every aspect of their identity,” he says. “It changed the way I interact with people for the better. I have mentored several undergraduate students from various backgrounds at UCLA, and I can honestly say that my experience in the WGS program helped immensely with this.”