Every day, about 20,000 vehicles cross the Northampton Street Bridge connecting Easton and Phillipsburg, tires on the metal deck producing a musical whir as drivers and passengers pass beneath golden finials, plaques, and gleaming reliefs of the Pennsylvania and New Jersey seals. 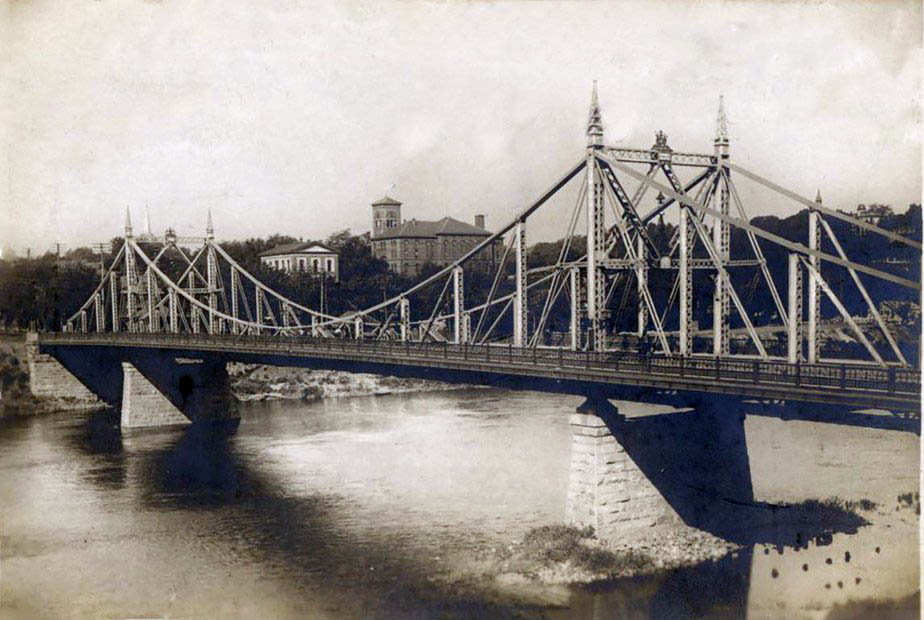 James Madison Porter III ’86, who served on the engineering faculty from 1890 to 1917 and whose grandfather was one of the College’s founders, designed the majestic span, built in 1896 and known locally as the “free bridge.”

The Northampton Street Bridge this year has new symbolic meaning as Lafayette celebrates the 150th anniversary of its engineering program. Even the anniversary logo features a silhouette of the span.

Students, faculty, alumni, and parents will build a replica of the Free Bridge on the Quad during Homecoming, Oct. 1.

A disciplined union of science and the humanities, Porter’s design exemplifies the Lafayette ideal, which was put into motion in 1866 when industrialist Ario Pardee gave a $100,000 gift “for the endowment of a scientific course at Lafayette College.” The endowment established a curriculum for civil and mining engineering, as well as chemistry, and an additional $200,000 gift brought about Pardee Hall, which housed the departments until 1927.

With Pardee’s gifts, Lafayette became a school of arts, science, and engineering. This sentiment was articulated in an 1866 report from the board of trustees.

They “set the goal of educating not just the engineer” but the whole person “who is able to meet the challenges of a world in which scientific, technological, and human needs have steadily become more complex.”

The Industrial Revolution was well under way, and the country was eager to rebuild itself after the Civil War, says Scott Hummel, William Jeffers Director of the Engineering Division. 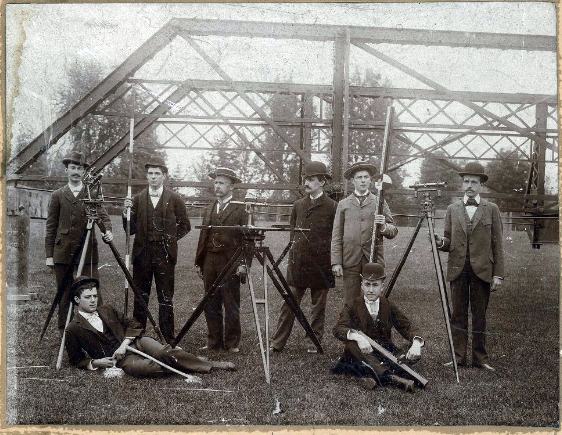 A civil engineering class from 1893

“The Civil War was a horrible conflict that fractured the nation,” he says. “Technical advances from the war used for the military got people thinking that it was time to use those technological advances for peaceful purposes to help people. And we’ve been doing that ever since here at Lafayette.”

Swept up by the electromagnetic advancements of Thomas Edison and Michael Faraday and the introduction of the telegraph in the Lehigh Valley, electrical engineering was introduced in 1889, just 10 years after the first use of electricity on campus in cooperation with Edison’s company. One of the first to enroll in the new electrical engineering curriculum was John Morton Davis, a great-grandson of John Morton, one of the Pennsylvania signers of the Declaration of Independence. 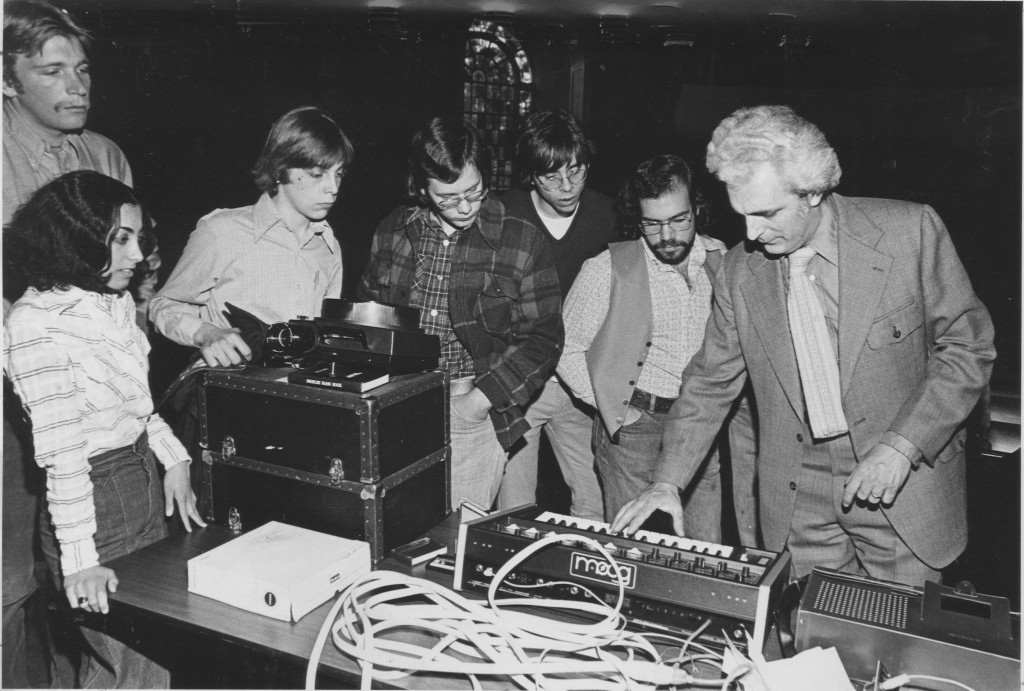 An electrical engineering class from the 1970s

Like the times and circumstances that inspired Lafayette’s engineering programs, this 150th anniversary year is another pivotal time for engineering, Hummel says.

“The capital campaign is going to be transformative for engineering,” he says. “We’re now at a time when we need to reinvest in our facilities and equipment and expand the staff and faculty. It’s time to grow.”

With an 80 percent growth in enrollment in engineering majors over the last 20 years and a U.S. News & World Report list ranking Lafayette among the top 15 engineering in the country, Hummel says. Lafayette placed 34th just a few years ago, ascending faster than any of the 250 schools ranked by the magazine.

“It’s all about the students,” he says. “From the moment they come to campus, it’s simply amazing to watch how their curiosity and enthusiasm for learning grows. When they leave Lafayette, they’re ready to make their mark.”

From the moment he took the required manufacturing design class as a sophomore, mechanical engineering major Freddie Hess ’16 knew he made the right choice and was at the right place to cultivate and refine his interests.

“I feel like I’m immersed in a tradition that only a few people will ever get to experience,” Hess says. “Especially with the anniversary, it feels like Lafayette is on the cutting edge of teaching us about the newest technologies, like 3-D printing.” 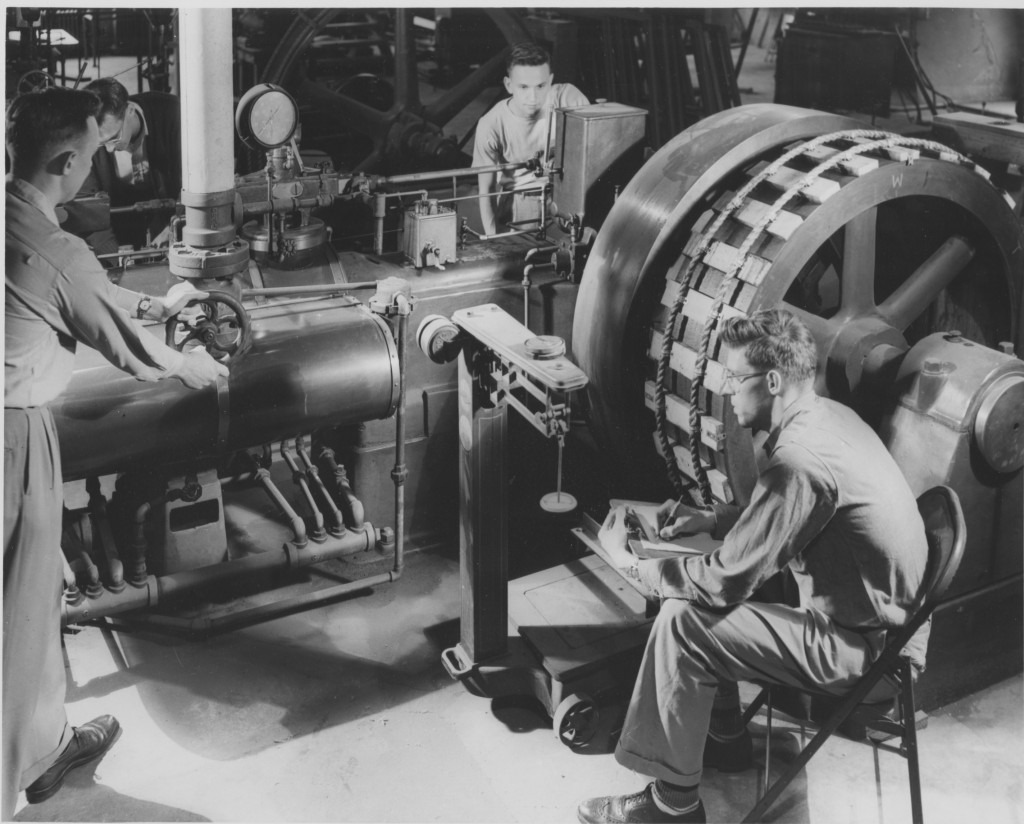 A chemical engineering lab in 1951

Emilie Grybos ’17, who’s a double major in electrical & computer engineering and women’s & gender studies, says she enjoys exchanging cheesy puns with professors 10 minutes before class and values their approachability when help is needed with homework or solving a problem.

“I wanted to be able to explore other subjects and come out with a well-rounded education,” Grybos says. “Lafayette was one of the few schools I looked at that had it all.”

Matt Kramer ’14, who majored in mechanical engineering, international studies, and Spanish, knows the value of staying in touch with the Lafayette community.

Chief engineer at ROAR Athletic Performance in Wilton, Conn., Kramer was one of the original employees at the new company that uses carbon fiber to build insoles that provide greater energy return to athletes in all sports.

When it came time to create a technical sheet for potential customers, he reached back to Hummel and other professors for guidance.

“It’s a great feeling to keep in touch and know you can seek advice at any time,” he says. “I’m only two years out of school and don’t yet have the experience of a senior engineer. But I know there’s always a lifeline that can take me back home to the College.” 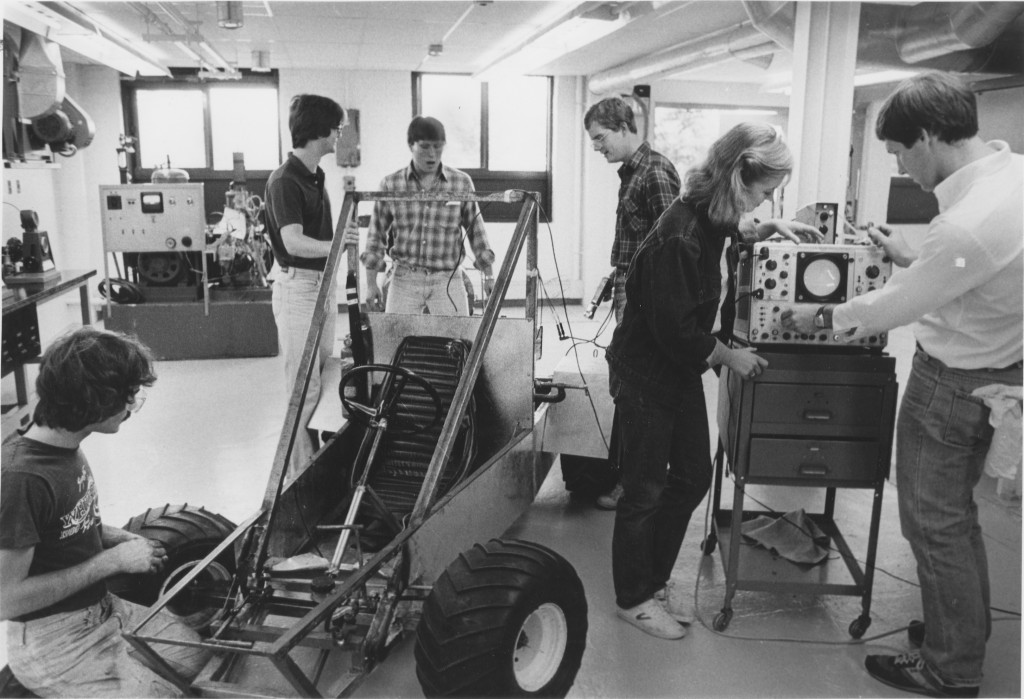 A mechanical engineering lab from the 1980s

“We’re learning about tissue engineering and limb regeneration,” Dewey says. “I never imagined I’d be learning and discovering on this level.”

Hummel is proud of the students and alumni he encounters. For that reason, he says Lafayette needs to stay at the forefront of engineering, to inform, motivate, and drive people to discover and seek solutions for the common good.

“At Lafayette we’re changing the traditional view of engineering. The messaging that has surrounded the engineering profession for decades is that engineers are problem solvers and developers of technology,” he says. “While this is true, it doesn’t get to the why, which is to help people. We’re changing the message of engineering from problem-centered to people-centered.”

“Engineering should exist to help people live longer, happier lives and develop technology to that end,” Hummel adds. “It’s up to the Lafayette College community to help society move forward.”